"You really are beginning to try our patience, you know!"

The Doctor & Jamie explain to Vaughan they're looking for Isobel & Zoe. Vaughan says they left denying they were put in the box. Vaughan says he'll show them inside a box but as they arrive at the train yard the boxes are drawing away on a train. Vaughan takes them to his other factory to meet train. Benton sees them leave in Vaughan's car who reports back to the Brigadier who gets Captain Turner sent to monitor things in a helicopter. The Doctor, Jamie, Vaughan & Packer arrive at factory where they go to Vaughan's office, an exact duplicate of that in London. The Doctor gets his circuits back. Jamie spots the UNIT Chopper through a window, while the Doctor sees what looks like a deep space communications array. Taken to see Professor Watkins, the Doctor blocks monitoring device with magnet so they can talk to Professor Watkins who shows them his Cerebration Mentor, a teaching device that can induce emotions. Vaughan sends Packer to get them but they give him the slip escaping in lift, then when it's stopped climbing the shaft onto the roof, then escaping down fire escape. They make their way back to the railway sidings searching for Isobel & Zoe but are found by guards. Jamie hides in a crate and is alarmed when the contents start moving ..... 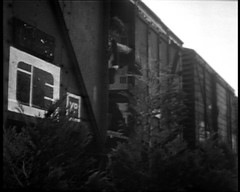 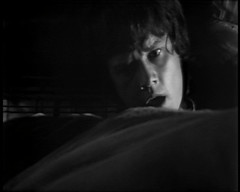 The ending to the episode is absolutely top drawer, Jamie is trapped in the crate with "something" that starts to move. This might be a bit of foreshadowing reminding you of previous stories.

Patrick Troughton & Fraser Hines are between them very much driving the story this week. Wendy Padbury, who played Zoe, was due her first week off so she's absent and with her guest star Sally Faulkner, which is explained away by Vaughan having kidnapped them last episode which in turn drives The Doctor & Jamie hunting for them in this!

WATKINS: But what can we do? If, as you say, they have Isobel and your young friend then we're entirely at their mercy.
DOCTOR: No, no, not entirely. There's my friend the Brigadier, remember.
WATKINS: Do you think he can help us?
DOCTOR: Possibly. But quickly, tell me, what is Vaughn up to? What's he doing here?
WATKINS: I know no more than you do. He's a ruthless man, without morals or principles. His object, I'm sure, is to get complete control of the electronics industry of the world!
DOCTOR: I wonder. I've a nasty feeling he's aiming somewhat higher than that.

Considerably higher as it happens! But it's now episode 3 and we still don't know who the Vaughan's allies are yet! This story is taking it's time to tell us. There are some hints though:

DOCTOR: That's odd. That's very odd.
JAMIE: What is it? 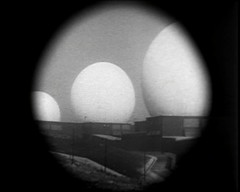 DOCTOR: Well, it looks like a deep space radio communication system. What's it's doing here?
JAMIE: Don't ask me, you're the brains.

So we know Vaughan's working with people from outer space.

VAUGHN: This strange Doctor's been on another planet, Packer.
PACKER: That's not possible.
VAUGHN: It is a fact, Packer. He has some sort of machine. Now let's see if we can learn more about it, shall we?

People who have met the Doctor on another planet.

VAUGHN: Has the information been considered?
PLANNER: The images of the two humans have been analysed and registered. They are known and are hostile.
VAUGHN: Hostile? How can that be? Have you been on Earth before?
PLANNER: No, they have been recognised on Planet Fourteen. They are dangerous and must be destroyed.
VAUGHN: Planet Fourteen? But how?
PLANNER: They must be destroyed.
VAUGHN: Yes, I'll deal with them.
PLANNER: Plans for invasion are nearing completion. Nothing must be allowed to interrupt them.
VAUGHN: Don't worry. Nothing will.
PLANNER: Nothing must be allowed to interrupt them.

Albeit one we've not heard of. If they'd said, for example "they have been recognised from Skaro" we'd know who the aliens were!

But we do know they are a race the Doctor has met before:

VAUGHN: Our friend the Doctor's a resourceful man. No wonder our allies fear him.
PACKER: Our allies know him?
VAUGHN: Oh, yes. I was ordered to destroy him. But first I must learn the secrets of this extraordinary machine of his.
PACKER: If you're been ordered to destroy him
VAUGHN: I don't take orders, Packer, I give them! Now, I think the time has come to stop playing games with this Doctor!

And it seems The Doctor's mere presence is driving a wedge between them and their human ally.

Don't forget that someone fired a missile at the Tardis from beyond the moon in episode one either!

JAMIE: Hey! Doctor, it's
VAUGHN: Confusing, isn't it?
JAMIE: It's exactly the same as your office in London.
VAUGHN: In all basic essentials, yes, it is. That's the secret of my success, you see. Uniformity, duplication. My whole empire is based on that principle. The very essence of business efficiency.

Nice touch having identical offices, which means the same set can be used again, albeit with a different window backdrop! I wonder if there's an alien machine behind the wall of this one too? 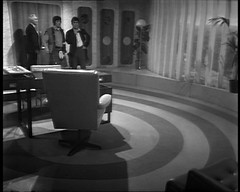 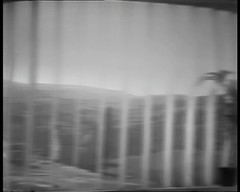 I know that at eight parts The Invasion is a little longer than expected or planed. In fact when Producer, and former Script Editor, Peter Bryant saw the material Kit Pedler had supplied for a six parter he reckoned that Derrick Sherwin should turn it into a four parter but when Paul Wheeler's “The Dreamspinner” went Tango Ultra on them, the Invasion ended up being stretched to eight parts and the "reserve script" Terrance Dicks had been knocking into shape got brought into play. Given this you might expect the Invasion to have a little padding. So when I see characters escaping from a stalled lift through the roof and climbing out which is the oldest trick in the book I'm pretty sure I'm able to identify some of the padding (and when you think about it was all the stuff with the lorry driver necessary?) Fortunately it's terribly good padding and everyone involved is sticking to the adage "if you're going to do something do it well". 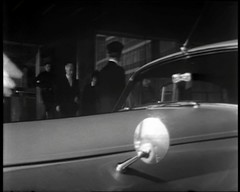 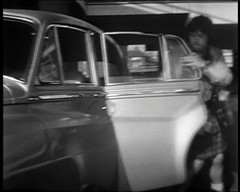 Troughton and Hines are on fine form, the latter getting to have a bit more comic fun as he gets in the back of the car, leaps out the other side and climbs in the front! 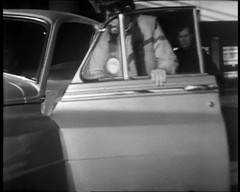 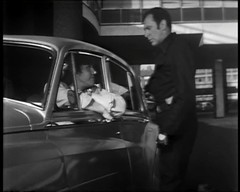 As per previous episodes there's plenty of location work. In fact this story has the largest location shoot so far! 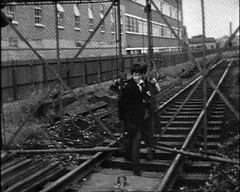 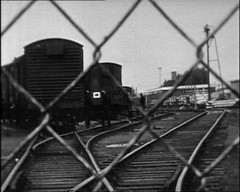 The former Guinness Brewery in Park Royal provides the Railway sidings seen in this story and work for the second & third episodes was filmed there on 11th September 1968. I've got a 1955 railway atlas of the UK but am struggling to find precisely where the railway siding are on the London Map, despite knowing exactly where Park Royal is from the Underground Station. I guess it links to the main line somewhere near Paddington Station. The story has it that Patrick Troughton & Fraser Hines enjoyed a fine lunch courtesy of the Guinness directors and had some trouble with the one brief scene they filmed in the afternoon requiring them to look round a corner. Troughton would later be sent a Christmas Pudding from the company, laced with their famous product, which exploded in his agent's office! 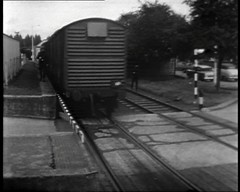 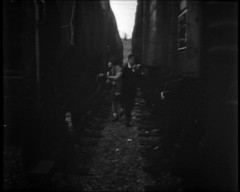 The same location is also used for the sequence with Vaughan's car arriving at his country offices. 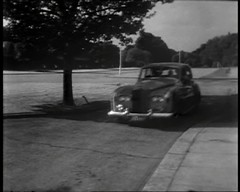 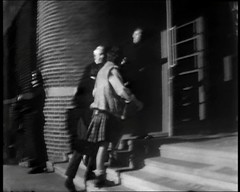 However the front gate to the offices, which the car is seen arriving at, is marked as "location unknown" in Richard Bignell's Doctor Who on Location. 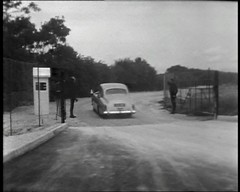 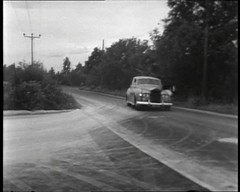 We know the sequences of the Helicopter tracking the car were filmed as Kingston Minerals in Kempsford, Gloucestershire on 5th September 1968, were the guards looking at the helicopter taken at the same location? 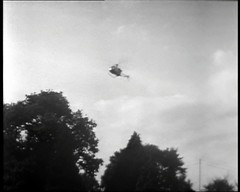 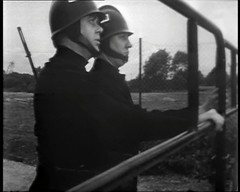 The guards themselves represent a small problem too: we don't know who they are. IMDB, which admittedly isn't the most reliable resource at times, doesn't say who they are and a quick glance by m'learned colleagues at the paperwork only list one guard, Maurice Brooks, of Lethbridge-Stewart's boots in Web of Fear episode 2 fame, as having been on location this episode.

The gate itself offers an intriguing possibility: is this the location where the truck is stopped in the missing episode one, and then followed by motorcyclists? I can't see them going to the trouble of using two sets of gates for the same complex. M'learned colleagues say that Dave Carter, a regular extra on the series from this point onwards, and Terry Duggan are the two guards on location for episode one. We know what Carter looks like from his other Doctor Who appearances and several people I've spoken to are reasonably sure it's him on the left.

Later on in the episode the rooftop sequence with The Doctor & Jamie is filmed at Associated British Maltsters in Walingford, also on 6th September 1968. 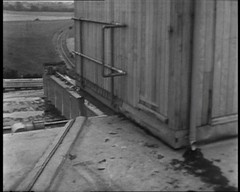 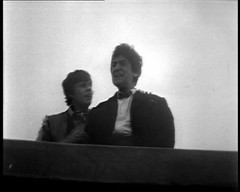 DOCTOR: Professor, tell us about what you're doing here.
WATKINS: Oh, it's very simple, really. I've been developing a new kind of teaching machine.
DOCTOR: Oh yes? A teaching machine?
JAMIE: What's it called?
WATKINS: I call it the Cerebraton Mentor.
JAMIE: Oh, aye?
WATKINS: The main difference from the other teaching machines is that it is able to induce emotional changes in the subject.
JAMIE: Oh.

Joining the cast this episode is Edward Burnham as Professor Watkins. He'll return to Doctor Who as Professor Kettlewell in Tom Baker's first story, Robot. Prior to this he'd been in the Quatermass and the Pit episodes The Wild Hunt & Hob as an Official. 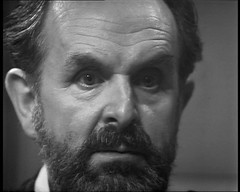 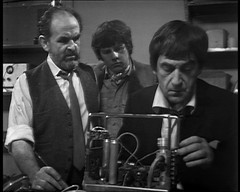