209 The Wheel in Space: Episode Six

"I imagine you have orders to destroy me?"

Leo fires the X-Ray laser destroying the Meteorites. The Doctor warns the control room of the danger to the oxygen supply. Bennett slips away and is killed by a Cyberman. Jamie finds the Time Vector Generator while Zoe hacks into the Cybermen's communications frequency, discovering that they know the Doctor is aboard the Wheel. The Wheel sights an approaching Cybership. Jamie & Zoe return to the wheel and help The Doctor and some of the crew over power a controlled crewman, Flannigan, and attach a control protection device to him. The Doctor confronts the two Cybermen luring one into a trap that destroys it. Flanagan and Jamie free another crewman and spray plastic into the chest unit of the last Cyberman, crippling it, but not before it can open the airlock doors to admit the invasion force spacewalking to the Wheel. The Doctor links the Time Vector Generator to the X-Ray laser and destroys the Cybership. The neutron forcefield is activated deflecting the Cybermen into space. When the communications are fixed the Wheel contacts Earth to report the incident. Zoe takes the Doctor & Jamie back to the Silver Carrier to reclaim the Tardis. She sneaks aboard, wanting to go with them. The Doctor uses his thought pattern scanner to show her what's out there on the scanner screen: An image of a Dalek appears.... 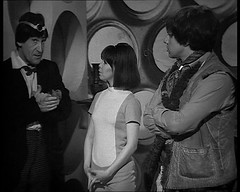 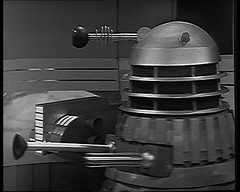 That was much better, some action at long last. Lovely confrontation between the Doctor & The Cybermen: 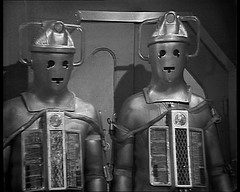 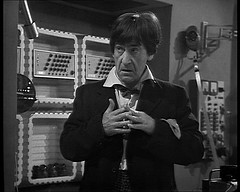 The action in the airlock is great,and if you look carefully you'll see that the Cyberman trying to enter the Wheel actually has his chest unit on the traditional way up with the little dish at the bottom. The other two Cybermen have the dish at the top and use it as a weapon. Since the dish, when mounted at the bottom is the descendant of the large dish like weapons the original Cybermen use I suppose that makes sense. 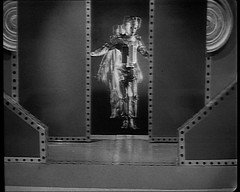 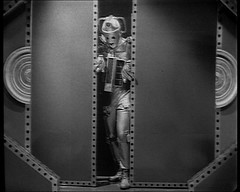 The episode starts off with Jamie and Zoe wearing the Space Suits (see episode 3 for more details) but during the Airlock scene Jamie, Flannigan and Valance are all suited up: 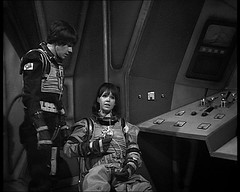 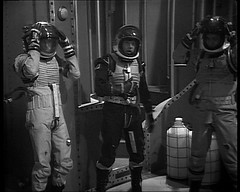 I believe this is the only time all three First Men in the Moon spacesuits are seen in the show together! 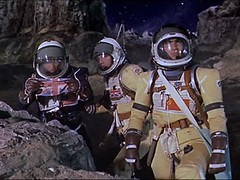 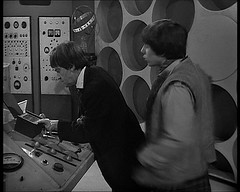 We get a brief glimpse at the end of the episode of two of the Power Station Control Panels in the Tardis! Were they there in episode 1, but not shown on the telesnaps?

This episode is the final Doctor Who appearance for Peter Hawkins. He joined the show with it's second story, The Daleks, where he voiced the Doctor's chief adversaries returning in The Dalek Invasion of Earth, The Space Museum, The Chase, Mission to the Unknown, The Daleks Masterplan, Power of the Daleks and Evil of the Daleks. He voiced Cybermen in The Tenth Planet, The Moonbase, Tomb of the Cybermen and Wheel in Space and also supplied the recording of Marc Cory heard in Dalek Masterplan 3: Devil's Planet. Outside of the television program he voiced the Daleks in both of their film appearances: Dr. Who and the Daleks and Daleks' Invasion Earth 2150 A.D. He would make one further appearance voicing the Daleks in the missing Out of the Unknown episode Get Off Of My Cloud, broadcast 1st April 1969 and would later be heard in Doomwatch voicing the Computer in the surviving first season episode Project Sahara which you can see on The Doomwatch DVD set.

This is also the last appearance of these Cybermen costumes, and the general look first seen in the Moonbase, although elements of them will pop up through the late 1960s and early 1970s creating some very odd variant Cybermen costumes. When the Cybermen return later in the year they will have another redesign that will define their look for the rest of the series.

For the last few months we've been counting runs of missing episodes, broken by odd episodes and the occasional complete story. Today we reach the shores of the promised land: the first of an 11 episode stretch of existing episode! We've not had a run that long since Space Museum-The Chase-The Time Meddler at the end of season 2 so it's something worth celebrating. From here on episodes, and whole stories, existing becomes the norm. We're not out of the woods yet: two stories still have missing episodes but both of them are in the next few weeks before the end of the Troughton era.

Way, WAY back in Tomb of the Cybermen episode one I presented this table showing what the archive holdings for this season were like prior to Tomb's recovery from Hong Kong:

I thought now we've reached the end of season 5 that it's worth producing an updated version of the same table to show what's changed in the 15+ years since then:

The chances of Wheel in Space once again being whole are significantly higher than most Doctor Who stories. It was sold to Australia, Hong Kong, Singapore, New Zealand, Gibraltar & Nigeria. Of these sales the last two, in 1973 and 1975, haven't accounted for their prints. In particular the station in Nigeria that bought this story was the one from which Enemy of the World & Web of Fear recovered. Quite noticeably the two other stories this station should of had, Abominable Snowmen and Wheel in Space, went unmentioned in any of the publicity at the time where you would of expected at least one Doctor Who journalist to be up on what should have been where and asked as to their whereabouts.

Episode 6 of The Wheel In Space was recorded onto 35mm film rather than the usual 625 line videotape. In 1977 this, and Enemy of the World 3, formed the sole BBC Film & Video Library holdings for season 5. Because the episode is archived on the higher definition 35mm film, rather than the 16mm prints of video recordings used to sell Doctor Who abroad, it looks significantly better than most Doctor Who episodes from the 1960s.

Wheel in Space was eventually novelised in 1988 by Terrance Dicks. Episodes 3 & 6 appeared on video as part of Doctor Who: Cybermen the Early Years with The Moonbase 2 & 4 along with some extra material including an interview with Cybermen voice artist Roy Skelton. The same episodes later all appear in Doctor Who - Lost In Time. A Soundtrack CD was released in May 2004 with narration by Wendy Padbury.

One significant feature of Wheel in Space 6 is it leads directly into a repeat of Evil of the Daleks using some footage from the cliffhanger to episode one. The first episode of Doctor Who was repeated the very next week after it's original broadcast due to power blackouts and news coverage of the day before on 23rd November 1963. However this was the first ever repeat of a full Doctor Who serial. Recently the Hand of Fear was broadcast on BBC 4 as a tribute to Liz Sladen. Knowing this story was coming up, it got me thinking.... what other Doctor Who repeats have there been over the years? Well with the help of m'learned friends on Roobarb's DVD Forum we attempted to compile a list of episodes/stories and dates. All repeats are BBC1 unless otherwise stated:

As you can see many stories have not had a repeat while several stories (Genesis of the Daleks!) have been aired on the BBC quite a few times now!