"The enemy had been finally defeated by the Doctor. No, no, I can't say that. If I say that. I nearly fell for it, didn't I. Another two seconds and I should have turned myself into fiction!"

The Master believes he has turned them into fictional characters: if the Doctor took his place he could release them. He refuses and is seized by the robots. The Doctor escapes onto the castle where he meets Jamie & Zoe. Jamie & Zoe keep repeating the same things: The Doctor works out this pair aren't real. He summons the Karkus to open a skylight who then fetches Rapunzel to allow the Doctor to climb into the skylight to interfere with the Master's machines. Gulliver arrives with the children. The Tardis is suddenly there with Jamie and Zoe but it's a trap and the Doctor finds himself trapped in a glass case. The Master adds him to the Computer, wishing to bring Earth under his control. The Doctor realises he has power now and releases Jamie & Zoe from the book, and the fictional versions vanish. They flee from the Toy soldiers with the Karkus coming to their rescue and destroying the soldiers. The Master and the Doctor struggle for control over the fictional characters pitting D'Artagnan against Cyrano de Bergerac and Sir Lancelot against Blackbeard the pirate. The Master Brain is overloading so the Master sends the robots to destroy him. Zoe interferes with the control systems overloading the Master Brain and allowing the Doctor to free the Master. The robots destroy the computer which causes the Time Travellers to be returned to the Tardis and the Master to his home. 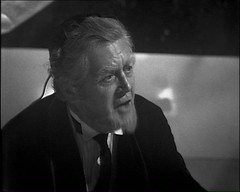 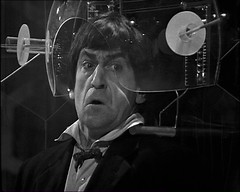 This episode is rather Prisoner like in it's telling of the struggle of the Doctor and the Master to control the land of fiction as they summon up various fictional characters to fight on their behalf. 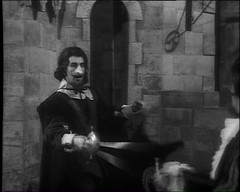 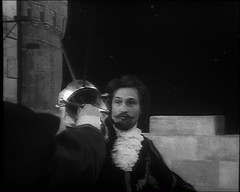 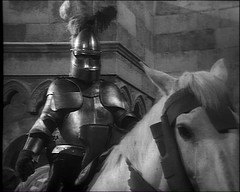 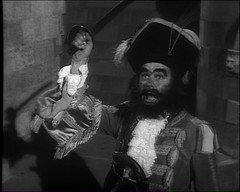 Through the course of the episode the Doctor is both helped and hindered by the various characters they've met elsewhere in the land. 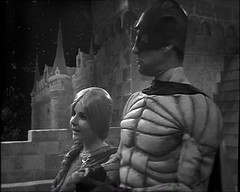 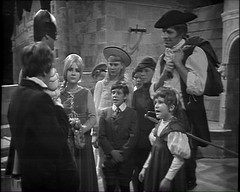 I find this last episode a little confusing in places, it feels a little rushed with lots of things happening very suddenly, mostly for no reason than someone has said they will happen!

I struggle with The Mind Robber, I really do. Episode 1 is great, and I tend to enjoy episodes 3 & 4. Episode 2 is just odd, and jars rather with episode 1, but you can see why when you know that episode 1 was written by a different author as a last minute replacement. As I've said this episode feels confusing and rushed. The Mind Robber is held by many as a cast iron classic bu I'm afraid it doesn't do it for me. Sorry!

At 18 minutes this is the shortest episode of Doctor Who ever, beating the records set the previous two weeks and establishing one that will not be broken. Here's that full list of shortest episodes again with the last two weeks added:

This episode survives as a 35mm film, used for transmission. It was kept by the BBC Film & Video library and was the only episode of this series that they retained. The other 4 episodes and a duplicate of this one were found as 16mm prints at BBC Enterprises.

The Mind Robber has been repeated by the BBC when it was the serial chosen to represent Patrick Troughton in the 1992 repeat season and was shown from 31 January - 28 February 1992.

The story was novelised by it's original author Peter Ling in 1986 and has since been turned into an audiobook narrated by Derek Jacobi.

A video was released in May 1990, alongside The Dalek Invasion of Earth, with a DVD following in May 2005.
Following the broadcast of this serial there was a 2 week break before the start of the next: The final episode of the Mind Robber aired 12th October 1968 and the first episode of the Invasion was on 2nd November 1968. This break was to allow coverage of the 1968 Olympics in Mexico, whose opening ceremony was later the evening that Mind Robber 5 was broadcast. The closing ceremony was Sunday October 27th and Doctor Who resumed the following Saturday.

"When someone writes about an incident after it's happened, that is history. But when the writing comes first, that's fiction. If we'd have fallen into the Master's trap, we would have become fiction!"

The Doctor finds a sword at his feet. The text machine says he kills the monster but the Doctor remembers the legend of Perseus and shows Medusa a mirror. Jamie's presence is detected and he is found by Gulliver. Jamie hides from the white robots searching for him. The Doctor and Zoe find the castle but are confronted by the Karkus, a comic book hero from Zoe's time. Being sure he is fictional Zoe defeats him. Now in servitude to Zoe he helps the Time Travellers get to the castle. The Doctor pretends to be the Karkus to gain entry. They find Jamie & Gulliver. The machine reports the test on the Doctor has failed. He deduces that if they fell into the Master's trap they would become fiction. They are invited in to see the Master, an old bearded man in a control room. He was a writer of a boy's adventure strip who was kidnapped and brought to the land of fiction where he serves the intelligence controlling the region. He wishes the Doctor to take his place. The Doctor refuses. Zoe & Jamie are caught in a library by the white robots who trap them inside a giant book. 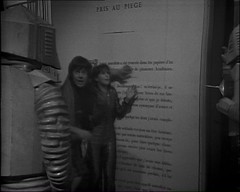 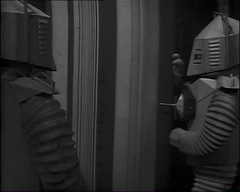 I can see that this story is perfectly well created but sorry folks, the latter episodes are increasingly not doing it for me. The style feels much more like one of the more experimental Hartnell stories: Celestial Toyroom springs to mind. I don't think it's made bad, I don't think they shouldn't have done it, unlike some 1980s stories, it just doesn't tick the boxes for me.

We finally get to meet the mysterious figure behind everything this week, The Master:

DOCTOR: Where are you?
MASTER: Here, patiently waiting. Oh Doctor, this is a great pleasure. And your two young companions. Now let me see. Oh yes, yes, yes. Zoe and Jamie. I have your dossiers here in front of me.
ZOE: You appear to be very well organised.
MASTER: Oh yes, indeed. We have to be. The running of this place requires enormous attention to detail. It's a responsible position, but very rewarding.
DOCTOR: Responsible, huh? To someone else?
MASTER: Not to someone. Another power. Higher than you could begin to imagine. Oh, I must congratulate you on the great skill in which you tackled the various stages of your examination.
DOCTOR: What is the purpose of all these tests?
MASTER: Well, do you know, when I was first brought here myself, I was as bewildered as you are.
JAMIE: Well, how long have you been here?
MASTER: I left England in the summer of nineteen twenty six. It was a very hot day, I remember. I think I must have dozed off over my desk, and when I awoke. Oh, but that' a long story. Did you ever hear of the Adventures of Captain Jack Harkaway?
DOCTOR: No, I can't say that I. Wait a minute, a serial in a boys' magazine?
MASTER: The Ensign.
DOCTOR: The Ensign.
MASTER: And for twenty five years, I delivered five thousand words every week.
DOCTOR: You are a writer.
ZOE: Twenty-five years, five thousand words a week. Well, that's well over half a million words.
MASTER: Yes, yes. It was probably some kind of record. Anyway, that was why I was selected to work here.
JAMIE: And you're the one that's in charge of all of this?
MASTER: In one sense, yes.
DOCTOR: Or is all this in charge of you?
MASTER: My brain is the source of the creative power which keeps this operation going.
DOCTOR: I see. That means that you are virtually a prisoner.
MASTER: Oh, no. No, no, no. You, you, you must excuse me for a moment.
JAMIE: Come on, Doctor, let's get out of here.
ZOE: Yes, let's. It gives me the creeps.
DOCTOR: No, I need to find out more.
JAMIE: Well, look, you keep him talking, and Zoe and me will find another way out.
DOCTOR: Jamie, I think it will be safer if we all stick together.
MASTER: Oh, I'm so sorry to have kept you waiting. Now, where were we?
DOCTOR: You were about to answer my question. Are you a prisoner here?
MASTER: Well, no. No, I wouldn't say that. In fact, I rather like being here. I have everything I could possibly want.
MASTER: This vast library with all the known works of fiction. All the masterpieces written by Earthmen since the beginning of time.
DOCTOR: I see, yes. And only an Earthman type creature has the power to create fiction. The power to imagine.
MASTER: Exactly. This is one field in which the intelligence I serve cannot compete. They need man, a man of boundless imagination, as a powerhouse. A lifeline, as you might say.
DOCTOR: What is this intelligence you serve, and why was I brought me here?
MASTER: Well, as you see, I'm no longer young, where as you, Doctor, are ageless. You exist outside the barriers of time and space.
DOCTOR: And you want me to
MASTER: To take over this unique situation. To take my place.
DOCTOR: I refuse!
MASTER: Refusal is impossible. You are here to serve us. There is no alternative.

The Master of the Land of Fiction is played by Emrys Jones. He's go on to appear in Out of the Unknown as Dr. Roger Full in The Little Black Bag, an incomplete third season episode of which a substantial clip can be found on the Out of the Unknown DVD Set. His Doomwatch appearance as Colonel Archibald Smithson in The Battery People survives in full and can be seen on The Doomwatch DVD 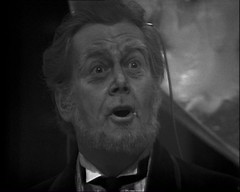 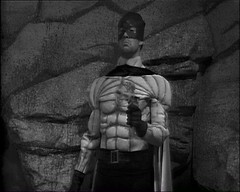 The Karkus, introduced this episode, is played by Christopher Robbie. He will later play the Cyberleader in Revenge of the Cybermen and can be seen as the Bomb disposal expert in the UFO episode The Long Sleep. He later served as announcer on several different commercial television stations.

Writing this episode is Peter Ling, the creator of Crossroads. On that program he worked with Derrick Sherwin, now the Doctor Who script editor, and Terrance Dicks, currently serving as his assistant. They used to get the train to Birmingham together for script meetings, became friends and Ling was asked to contribute to Doctor Who when Sherwin became script editor. He's not the only writer from that time on Crossroads to work on Doctor Who: The Crossroads Script Editor Don Houghton would later pen two Third Doctor tales. Several of the current crop of Doctor Who writers picked up valuable experience writing for Soap Operas too.

The previous episode of this story set a record for the shortest Doctor Who episode at 19m29s. This episode breaks that, albeit by a mere 18 seconds, at 19m11s. The record again stands for precisely one week.