169 The Evil of the Daleks: Episode Seven

"The Daleks must not, cannot be destroyed. The race will survive! The Daleks will live and rule forever!"

In the Dalek city, Daleks start to question the orders they have been given. Maxtible is lured out of his cell with the promise of the transmutation machine he craves but passes through an arch that puts the Dalek Factor into him. The Doctor is hypnotised and likewise seemingly converted but the process fails because he isn't human. The Doctor converts the machine to inject the Human factor and then gets the Emperor to order the Daleks through it because the Daleks the human factor has spread from the other three Daleks. The two Dalek factions quickly end up battling each other. Waterfield is killed saving the Doctor's life, while Maxtible kills Kemel. The fighting spreads to the Emperors chamber causing him and the city to be destroyed. Jamie rescues Victoria as the Doctor escapes from the city.

JAMIE: Doctor.
DOCTOR: Jamie, Jamie!
JAMIE: A Dalek nearly caught us, but I tossed it over the edge. But, poor Kemel.
DOCTOR: Kemel?
JAMIE: Aye. You see, he was trying.
VICTORIA: Where is my father? Is he dead?
DOCTOR: Yes. Yes, I'm afraid he is. But he didn't die in vain. I think we've seen the end of the Daleks forever. Jamie, we must get along to the Tardis. It's over there.
JAMIE: We can't leave her alone, Doctor.
DOCTOR: We're not going to leave her. She's coming with us. The end. The final end. 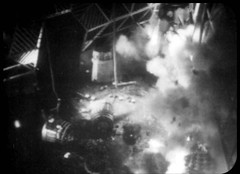 Another final episode where it all goes bang bang bang and everything happens at once leaving everyone dead bar the Doctor and his old & new companions. It's another episode where you suspect we're not getting the full benefit of the episode with just the soundtrack but fortunately model and effect sequences from this episode survive as part of the Last Dalek 8mm film and can be found on several Doctor Who DVDs including Doctor Who - Lost In Time. 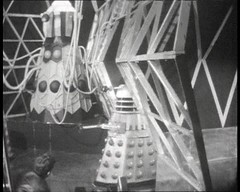 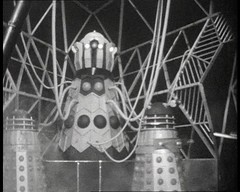 These give us a really good look at the Emperor prop and in the process show us the final appearance of Dalek Dome 2 with it's repaired broken neck ring. Thrown out by the BBC following this story it was salvaged by Bernard Wilkie, one of the heads of the special effects department and repaired. It is now in the possession of film director Peter Jackson, a big Doctor Who fan.

We're joined by a fifth Dalek operator for this episode as Ken Tyllssen, previously a Sensorite in The Sensorites and a Mechanoid fighting the Daleks in the Chase, makes his one and only appearance inside a Dalek casing.

The full size props are supplemented by Louis Marx Daleks in several model sequences in the battle. 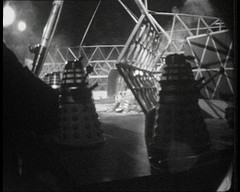 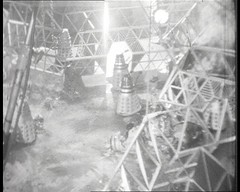 It wouldn't be the last time these Daleks appeared in Doctor Who either, they return forming the bulk of the frozen Dalek army in Planet of the Daleks.

The function of Evil as as a story is to provide a final end for the Daleks removing them from the series so Terry Nation could launch them in their own series. Unfortunately that plan goes awry and the Daleks do return but not for a few years in the program's life, their longest break from the show. While we see the city Daleks killed we now know there's the possibility of others surviving elsewhere in space. The only thing is the last of, in Dalek terms, is the use of Peter Hawkins for their voice. He'd been with the show since it's second serial but when the Daleks returned they had new voice artists before returning to his co-worker here, Roy Skelton, in Planet of the Daleks. Hawkins has two more Doctor who voices yet to come, as The Cybermen in Tomb of the Cybermen and Wheel in Space before making an encore appearance as a Dalek Voice in the missing third season Out of the Unknown episode Get Off Of My Cloud. And in amongst all the chaos here we get a little tiny hint to the Doctor's own origins as he speaks to Victoria:

VICTORIA: What are you thinking?
DOCTOR: I'm trying to puzzle out a problem, Victoria. The Daleks say I'm going to do something for them. Something I would rather die than do.
VICTORIA: Perhaps they think you're like him.
DOCTOR: Oh, no. The Daleks know me well enough by this time.
VICTORIA: They intend to persuade you then.
DOCTOR: Oh no, no, it isn't that either. You see, there isn't a persuasion strong enough. Not even the offer of all the lives in this room.
VICTORIA: I see.
DOCTOR: Five lives against a whole planet? Well, it's not a choice, is it?
VICTORIA: No.
DOCTOR: Even if I could trust the Daleks, even if they set us free, we still couldn't go back to Earth. I suppose I might try and take you all to another universe. I might even try and take you to my own planet.
VICTORIA: Your own?
DOCTOR: Yes, yes, I live a long, long way away from Earth.

More will follow in the next story, The Tomb of the Cybermen.

Evil of the Daleks has the distinction of being the first full Doctor Who story to be repeated when it was shown on the 8th June - 3rd August 1968, plugging the gaps between seasons 5 & 6. It was introduced at the end of heel in Space by a small amount of footage from the close of episode 1 of Evil of the Daleks, while the start of episode 1 of Evil included some dialogue from the Doctor and his then companion Zoe setting the scene. The first story of season 6, The Dominators, then makes reference to the Doctor being tired from having mentally projected this earlier tale for his new companion!

Conversely Evil of the Daleks was the last original series story novelised. It appeared in 1993 and was written by John Peel who tackled many of the outstanding sixties Dalek stories. This left five stories un-novelised for Target books: The Pirate Planet, City of Death, Shada, Resurrection of the Daleks and Revelation of the Daleks. Three are Douglas Adams stories, two are Eric Saward Dalek stories.

Most modern fans first exposure to this story was the tape version of the soundtrack was released in 1992 with narration by Fourth Doctor Tom Baker, which topped the spoken word charts for sometime. A CD version was issued in 2004 with narration by Fraser Hines, who plays Jamie.

Only episode two of this story exists to watch and it was released on video in 1992 as part of The Daleks: The Early Years with Dalek Masterplan 5 & 10, Counterplot and Escape Switch, then the only surviving episodes of that tale. All 3 episodes were released on DVD in 2014 as part of Doctor Who - Lost In Time.

This also brings us to the end of the fourth season if Doctor Who, the only one without a complete story. It used to share this distinction with season five, but it doesn't any more! So when we return on 2nd September 1967 we'll be starting season five by watching the first episode of the first complete story since the War Machines!