215 The Mind Robber: Episode One

"It moves the Tardis out of the time space dimension. Out of reality!

The time travellers escape the volcanic eruption by retreating to the Tardis but the fluid links fail. As smoke fills the Tardis interior the exterior is buried by lava. The Doctor uses the emergency unit and moves the Tardis out of the time/space dimension taking them to nowhere. Doctor tells Zoë not to leave Tardis. Jamie sees Scotland on scanner then Zoë sees her home city: she opens doors and goes outside. 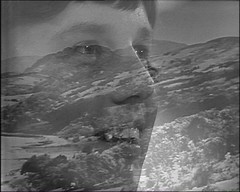 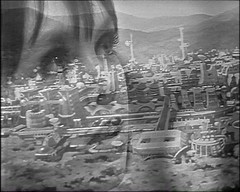 Jamie finds the Doctor who tells him that she was lured out. An emergency alarm sounds inside the Tardis and Jamie runs outside to find Zoë. A noise fills the Tardis as the Doctor senses a presence and fights against it. Jamie finds Zoë in white void. Both are now lost and call for the Doctor. He hears them but thinks it's illusion. Jamie & Zoë think they are being watched then hallucinate their homes again. They are captured by white robots. The Doctor sees them in a vision and a voice urges him to follow them, causing the Doctor to wander into the void. Once outside the Tardis he finds that it's white instead of it's usual blue and similarly Jamie & Zoë are clad in white versions of their costumes. He gets them back into the Tardis which dematerialises. Jamie falls asleep, dreaming of a Unicorn. The Doctor hears a sound which reveals to him that the presence is in the Tardis. The Tardis flies to pieces in space leaving Jamie & Zoë clinging to the console as the Doctor drifts off into space and thick cloud surrounds them. 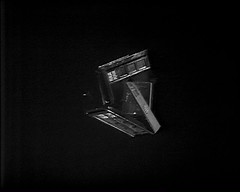 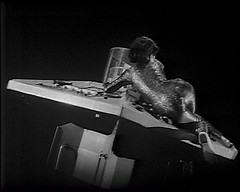 Wow, that was something else. A little like Edge of Destruction perhaps, only done right. Loved that. The void with everyone dressed in white imagery is very striking: I can remember seeing something very similar in the Battlestar Galactica episode War of the Gods when I was much younger. But what everyone remembers about this episode is the scene with the companions clinging to the Tardis console as Zoë, dressed in a sparkly catsuit, has her bottom rotated towards the camera.

When we left Derrick Sherwin he had just cut The Dominators from 6 episodes to 5. He had the four part Mind Robber in the bag but needed enough episodes to fill a ten week slot in the schedules between the start of the season and a 2 week break due to the 1968 Mexico Olympics. So needing an episode, but with no money for extra sets, costumes or actors this is what he dreamed up. So the white robots we see here were reused from a sadly missing second season episode of Out of the Unknown called The Prophet. 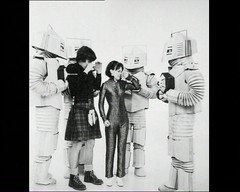 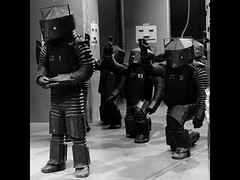 The Tardis sets were in stock, and out comes the foam machine to simulate the lava, job done. 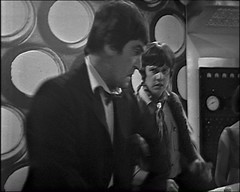 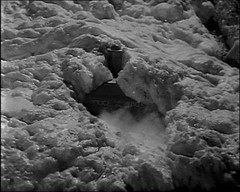 Because he's the script editor he couldn't write for the show due to BBC rules so this episode goes out without a writer's credit on it for the only time in the show's history. These rules would shortly change but not before it's led to the game of musical chairs that we're about to see.

There's a couple of other reused props that are easy to spot. Inside the Tardis is a black version of the wall mounted control panels we've been seeing since Dalek Masterplan and in the power room is the dome shaped piece of equipment, recycled from Curse of the Fly and first seen in Doctor who in The Space Museum. 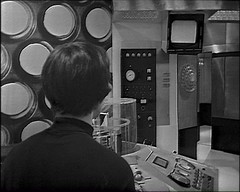 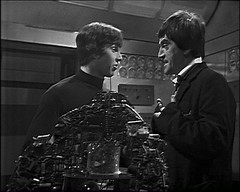 The first four episodes of this story were found in the possession of BBC Enterprises in 1978. Enterprises had 16mm film prints of all five episodes, but the superior quality 35mm transmission print of episode five had survived in the Film & Video library.

And we would be failing in our duty if we didn't welcome aboard first time Who director David Maloney. He'll be back for two more stories before this season is out. His total of 19 episodes directed in one season (this one!) is easily a record and he goes onto record the second most number of episodes of any Doctor Who director other than Douglas Camfield.

Four actors are used as White Robots in this story. Of those Ralph Carrigan has the most extensive Doctor Who CV appearing as an Extra in The Myth Makers, Monoid Two in The Return and a Cheerleader in The Macra Terror. He's back next story as a Cyberman. In fact the White robot head design, with the handle ears, looks oddly like a Cyberman. 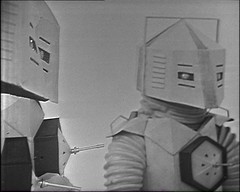 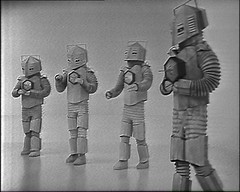 Of the rest of the robots Terry Wright was also in The Macra Terror as a Cheerleader and John Atterbury returns in The War Games as an Alien Guard leaving just Bill Wiesener without a Doctor Who appearance in a different story.

We will come on to the owner of the disembodied voice when the character it belongs to is revealed later in the story .......