"To raise Atlantis from the sea was only the dream of a madman after all."

The Doctor & Ben find the wounded Thous and remove him to the tunnels where he gets Sean & Jacko to take him to the surface. They go to find Polly & Jamie who've gone to Zaroff's laboratory seeking them. Ben & the doctor bluff their way past the guards and sabotage the generators. Polly & Jamie are lost in the tunnels when they notice the walls start crack letting the sea water in, which floods the tunnel emerging through the statue in the temple. Damon finds Thous, Sean & Jacko in the tunnels and leads them to safety up the shaft onto the mountainside where refugees are gathering. Water floods Zaroff's control chamber separating Zaroff from the controls preventing him from activating the mechanism to lift Atlantis. Ben & The Doctor are forced to leave him and escape to the surface where they find Jamie & Polly who had feared them dead. The Tardis leaves, witnessed by Sean & Jacko, and the Doctor declares they are going to Mars. However the Tardis is shaken by an unknown force and is out of control.

It's a story about Atlantis: it should be pretty obvious it's going to end with it being destroyed and flooded. And that's just what happens here. A brief clip, excised by the Australian censor, of the destruction exists showing Zaroff's final moments as he sinks beneath the rising water. 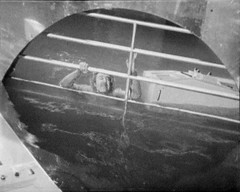 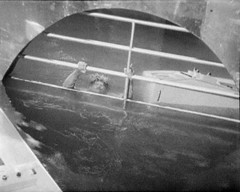 At least one other character's death occurs off screen:

THOUS: How is my poor country?
DAMON: The water has already flooded the lower parts of the city.
THOUS: The great enemy, which we held at bay for so many centuries, the ever-lasting nightmare is here at last.
DAMON: Rescue parties are being organised. All passages have been blocked except the main shaft. We're keeping that open till the last to give the stragglers a chance.
THOUS: What of Lolem the priest?
DAMON: Well, last seen he was going towards the temple to seek aid from Amdo.
THOUS: He is lost then.

In fact I get the impression writer Geoffrey Orme may have something against religion in general from what follows:

DAMON: Any sign of the Doctor?
ARA: No. He must have died saving us.
THOUS: We'll raise a stone to him in the temple.
DAMON: No. No more temples. It was temples and priests and superstition that made us follow Zaroff in the first place. When the water's found it's own level, the temple will be buried forever. We shall never return to it. But we will have enough left to build a new Atlantis, without gods and without fish people.
THOUS: Yes. That shall be his memorial.

So we see that some Atlanteans escape to the surface, and you have to assume that the fish people survive down there in the water. Woe betide them if they ever find a Sea Devil nest!

Of course this isn't the first time this Atlantis has been flooded/sunk and you have to wonder how it got down there. For an explanation see The Daemons or The Time Monster. But not both! As I said earlier, if they're so dependant on the fish people how did they survive for so long down there? And if they've got the shaft which they use to escape in this episode, why haven't they left the city and returned to the surface before? All very odd, plot holes you could drive a submarine through. There's contemporary evidence that the script wasn't quite up to scratch and had been dropped as Patrick Troughton's second story, replaced by the Highlanders, and only pressed into service when another story by Galaxy Four author William Emms fell through when he was taken ill.

But the telesnaps show some terrific imagery in this episode as water pours through the mouth and nose of the giant face of Amdo in the temple flooding the set: 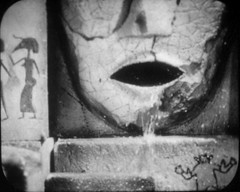 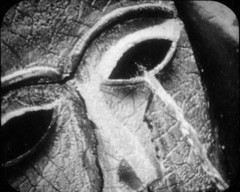 You get the feeling that the disaster aspect of this episode would look rather good on screen!

The telesnaps also show a number of items we'll recognise. Prominent amongst them is the prop referred to as The Rel Counter from it's appearance in the Dalek Invasion of Earth movie. However either side of it here are two panels that would seem to be similar to those seen in earlier episodes. We'll get a clearer look at these two in a later story. 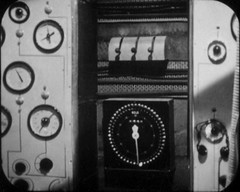 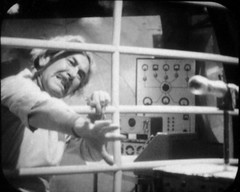 In fact this episode is what put me onto the panels in the first place. I saw the panel with the dials, lights and lines peaking through barrier and though "I've seen that somewhere before....". Little did I know what it would lead to as it turns out these panels are EVERYWHERE in 1960s Doctor Who and many other pieces of sixties sci fi and fantasy!

For more on the panels and their appearances on television so far see this article.

It's not the only recognisable object here as the Power Box the Doctor snipped a cable in in episode 2 is revealed as the same power box he fiddled with in Power of the Daleks! 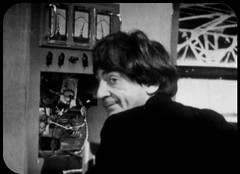 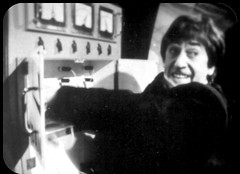 Our heroes all survive the flood, reunited on location again at Winspit Quarry and Beach. For the scenes in episode 1 Anneke Wills' Polly was wearing her clothes from, the Highlanders. Now she's reduced to the much more skimpier costume of an Atlantean slave girl which isn't suitable wear for an English beach in Decemeber as she recalls on the DVD!

From the beach we return to the safety of the Tardis, allowing Jamie to do some of the typical new companion restating what the series is about stuff:

DOCTOR: Right. Off we go into the wide blue yonder, as someone was once heard to remark.
POLLY: Hooray.
BEN: Yeah, I'm not sorry to be out of that place. Phwoar, Jamie, you don't half stink of fish!
JAMIE: Oh, you want to take a wee sniff of yourself, Benjamin. He's not exactly a bonnie bunch of heather.
DOCTOR: You sound very happy, Jamie.
JAMIE: Oh aye, Doctor, I am now. You know I never thought I'd say this, but, well it's great.
POLLY: What is?
JAMIE: All this. I'll never know what makes it go, mind you, but, well, at least I feel safe in here. It's only the wee things outside that are, well, alarming.
DOCTOR: He's got a point there.
BEN: Yeah, you can say that again.
JAMIE: Is it a fact, though, Doctor? You can't exactly control the Tardis?
DOCTOR: Control it? Of course I can control it.
JAMIE: No, no, what I meant was, can you not exactly make it go where you mean it to?
DOCTOR: If I wanted to. It's just that I've never wanted to.
BEN: Oh, yeah, I bet.
DOCTOR: Right, just for that, I'll show you. Now, where shall we go? I know, let's go to Mars. 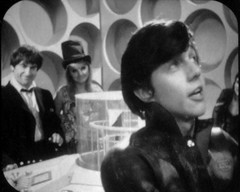 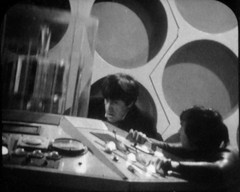 POLLY: Doctor, what's happening?
BEN: Doctor, can't you do something?
DOCTOR: Do something? I seem to have done something. It's all your fault, wanting me to tamper with the steering. I'm very sorry, everybody, but I'm afraid the Tardis is out of control!

Neatly leading us into the next story, The Moonbase.

Underwater Menace 4 sounds a pretty good episode, I'd love to see it. For years I'd argued the story as a whole was much better than it's sole representative episode, the third one, a common problem with several Troughton survivors like Enemy of the World and, we believe, The Space Pirates. Reunited with the second episode the third is much better but both one and four sound good and look OK on the telesnaps especially the location filming and flooding disaster scenes. I'd happily see the remaining two episodes of this come back.

This is the only Doctor Who writing job for Geoffrey Orme and was the second and final directing assignment for Julia Smith. The cast were known to be unhappy with the script and the star, Patrick Troughton, didn't get on with the director so you can see why neither returned. Smith went on to great success in the BBC including helping to create Eastenders.

The Underwater Menace was novelised by Nigel Robinson in 1988. A CD of the soundtrack, with narration by Anneke Wills, was issued in 2005 and was reissued in 2012 as part of Doctor Who: The Lost TV Episodes Volume Four(1967).

The Underwater Menace was finally released on DVD on 26th October 2015. Like episode 1, episode 4 is represented with a simple photosnap recon which is effectively an in order slide show of just the telesnaps taken for this story. Apparently it was done like this on cost grounds on direction from managers at BBC Worldwide. When those working on the project offered to make it a bit more fancy for free their offer was turned down. I do note they've sneaked a fade effect into the Tardis dematerialisation here! The DVD includes the surviving Australian censor clips, sadly not dropped into the episodes, and of course the recovered episode 2, the real selling point for this DVD. For the episode 4 commentary recordings of archive interviews conducted with Hugh David, the intended director for this serial, Innes Lloyd and Patrick Troughton were used. Barring any further returns it looks as if The Underwater Menace will be the final classic series Doctor Who release.